Barry was the club chairman for several years and below is a tribute written by his friend Rob McDonald. 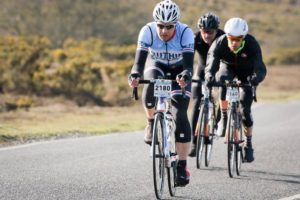 This June we said a sad farewell to our great friend and former Wrexham RC Chair Barry Williams who passed away peacefully at home in Penyffordd. Barry was just 45 years old and leaves behind his wife Suzanne and young daughters Seren and Bethan, as well as loving parents Bronwen and Berwyn, and brother Darren.

Barry was that frustrating thing to those of us with lesser abilities, a natural all-round sportsman. A talented footballer, swimmer and athlete in his youth, he later took up cycling in its various forms, enjoying both road and off-road disciplines, in competitive and non-competitive events including numerous MTB enduros, as well as (team) time trials, circuit races and sportive rides – at home and abroad, and cycling trips with his mates. He was also known to sneak off for the odd solo venture on his family holidays in the Canaries.

Just two months after the arrival of his first daughter in 2011, Barry was diagnosed with a brain tumour and for the last six and a half years of his life he underwent numerous surgeries, as well as radiotherapy and chemotherapy treatments as he battled his condition. Despite the debilitating treatment and recovery cycles, his determination to continue to set, and meet, sporting goals was a source of astonishment and inspiration in equal measure. Barry was an active contributor to the local sporting community throughout his adult life, both volunteering his professional expertise and supporting the development of others. He was elected to serve as chairman of Wrexham RC and brought his calm authority and much needed organisational skills to the role, honed in his career as a senior project manager in IT. He was also instrumental in establishing Wrexham RC as a ‘go-ride’ club, training as a British Cycling coach, acting as club welfare officer and going on to coach children at the club’s go-ride sessions. He continued to support the go-ride sessions as a parent, passing on his own love for the bike to little Seren and Bethan.

Barry was proud of his Welsh roots and his local community and was always keen to contribute through sports, local events and charity work both before and after his diagnosis. He supported local cycling events such as the Circle of Hope and the Rise Above ride as well as venturing further afield whenever he could, riding the tough Tour of Pembrokeshire sportive just a handful of months after his first surgery and despite ongoing drug treatment that would have floored others. 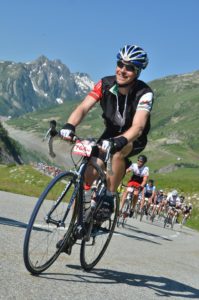 In 2013 Barry took on – for the second time – the challenge of riding La Marmotte (Glandon, Télégraphe, Galibier and Alpe D’Huez). On this second occasion he’d recently under-gone more brain surgery and had had very limited time to train, but managed to achieve a result many healthy amateurs would envy. Later in his treatment regime Barry completed the Prudential Ride London 100 mile event raising over £2,500 for the Brain Tumour Charity, a cause obviously close to his heart. Despite his own health challenges Barry remained determined to contribute so others might benefit. In his endeavours he was steadfastly and unquestioningly supported by his loving wife Suzanne. It was Suzanne who was required to balance the challenge of managing the demands of their young family, supporting the logistics of Barry’s trips and providing Barry with any necessary care along the way. Her dedication, love and support matched Barry’s strength over the course of his illness.

As a native of Ruthin, he was delighted to see the creation of Ruthin CC in 2015 and he joined that club as well, proud to wear a Ruthin jersey – sometimes in combination with Wrexham RC accessories! – and supporting the new club’s activities and trips out and about whenever his illness allowed.

As well as riding Barry was an all-round cycling fan – there for the Grand Départs in London and Yorkshire, on the Champs Elysées for the Cav/Wiggo show, as well as the 2012 Olympics on the road and in the velodrome, numerous ToB stages and the track world champs in Manchester. Listing Barry’s many achievements, especially in the face of his illness, gives a sense of the determination and fortitude of the man but not an insight into his character as a friend.