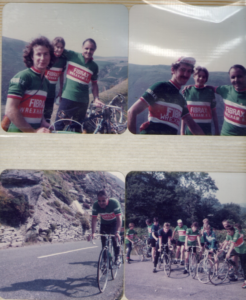 Whilst enjoying an evening with club mates at the annual prize presentation earlier this year, I was slightly overcome by feelings of nostalgia when I saw the display of awards at the front of the room. And before you ask... no, I had not drunk too much wine! I recognised many of the awards from my Dad’s trophy cabinet back in the 1980s when he was an active member of the club, and the display brought back fond childhood memories of studying the list of winners on the side of each trophy at home (as well as assisting with the annual “brasso-a-thon” at the end of the year).

Many of the awards are memorial trophies, having been presented to the club, or purchased by the committee, in memory of revered club members who have sadly passed away. Some of the names on these trophies were familiar to me (such as Terry Smith, who I remember well from his days as Hill Climb organiser in relatively recent years); but others, which dated back much further, I had no knowledge of, but was interested to find out.

With the agreement of the committee, I embarked upon a small research project to discover the history of our club, and particularly the “names behind the trophies”. I contacted numerous club members, past and present, for information, and am extremely grateful to them all for the help they have given me.

In particular, I would like to thank David Eccleston, Terence Dean, Gerry Jones, Mike Duffy, my Dad (Dave Davies), Paul Holt, Simon Waters, David Williams, Chris Edmondson, Andrew Partridge and Keith Jones. My thanks also go to Alan Roberts who has been a friend of the club since he started racing as a juvenile in the early 1970s, and whose memory of “who won what” in the last 45 years is utterly astounding! Finally, I am very grateful to Brian Jones of Kimroy Photography, who has kindly allowed me to use one of his superb photographs of our Team Triallists in action at last year’s National Championships. Thank you!

I hope you enjoy reading it as much as I have enjoyed writing it.